We were extremely lucky to have sat down with the award-winning, Lagos based artist, Ayoola Gbolahan. His works are breathtaking and thought-provoking. No surprise that his words are equally as captivating as though spoken by a modern philosopher.

It has been a whirlwind couple of years for Ayoola. He has received a number of awards including the “54 Nigerian Art Masters” from the Greek Embassy as well as being crowned the winner of The African Artists Foundation’s National Art Competition.

His paintings dive deep into the being of humans with a clear focus on human anthropology. Ayoola is an exceptional artist and we enjoyed this opportunity to get to know more about the man behind the exceptional art.

Mary: I read an article where you stated that “the definition of man from the non-physical state inspires a lot of what you do”. Exactly what do you mean by this?

Ayoola: I’m more interested in what lies beneath the surface. I don’t define man by what I see but by what I feel about a human. The true meaning and not what you see in the mirror.

When I engage humans, I want to be in touch with the real individual which I believe lies where natural sight can’t see.

Mary: Do you have a creative process when starting and completing a painting?

Ayoola: No particular ritual. I lay out colours first. The ones I need on the particular work. I clean everywhere. I can only work in a clean environment. And even when I feel I’m done, I’m in no rush to sign the work as I’ll want to communicate with the work for a while to understand what it wants to say to me.

Mary: What has been the greatest highlight of your art career so far?

Ayoola: Back in 2007 , I got an award from the Greek embassy which, according to their research, they consider me a master of my art alongside oldies like Bruce, Osinowo and co. At that time, I didn’t think anyone noticed that much of what I was doing although I knew I was making lots of sales from my gallery. However, to be given an award of such manner on the same stage with those senior citizens gave me some goose bumps. Every other thing after then, I could justify arguably but that one was a shock and surprise.

Mary: Do you think African artists have the same opportunities to excel in the international market compared to, say, European artists? If not, why do you think that is?

Ayoola: I’d like to focus on Nigeria, and nope, they don’t. If you’re talking about opportunities, not at the moment. The western guys have opportunities of several institutions, grants, consistent wealthy collectors who support in many ways other than just buying. Great art schools. String of galleries with international presence and so on. We can’t be talking about same opportunities when we don’t have a similar ecosystem.

Mary: What practical changes can we undertake to make it easier for aspiring African artists to break into the national and international art scene?

Ayoola: Nigerian money needs to back Nigerian art. That’s the one major step. Institutions that promote and support art need to be up and running. The art schools need to do much more than sticking to outdated curriculum. Galleries need to seek more funding from investors to be able to function properly. Most are operating like art shops at the moment. The first place the artist(s) needs to be accepted and celebrated is in the country they reside or are from after then, the foreigners would notice.

Mary: I loved a statement that you made recently – “a painting for me is a culmination of emotions, pain, love, joy, curiosity of the unknown; experiences, relationships, struggles, victories, engagements with human beings’ actions and consciousness.” Would you say that your art gravitates towards a specific set of emotions or types of experiences?

Ayoola: My art purely stems from my experiences and emotionally base. If I don’t feel it, I can’t paint it. No specifics or certain experiences. I move around a lot and it’s what I engage or feel that I paint at the time. I could also say, philosophy/anthropology has a solid influence on what I do.

Mary: When all is said and done, what would you say defines you living your most ‘successful’ life (some may refer to this as self actualisation)?

Ayoola: The pursuit of oneness; godlike nature in a human state.

Mary: Tell us one thing that your followers & our wider audience may not know about you?

Ayoola: I’m deeply spiritual. Deeply. But I don’t want to be seen that way so as not to be misunderstood as being religious in any way. I consider religion a thing from the pits of hades. 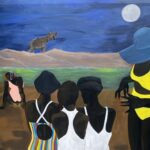 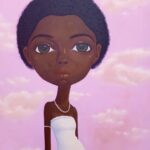 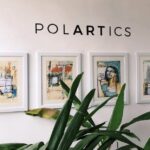 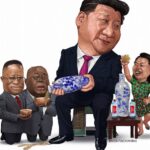 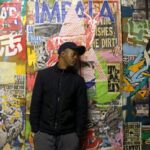 We would appreciate you sharing the chats you enjoyed on your social media pages.